Antibiotics in food: A global Concern 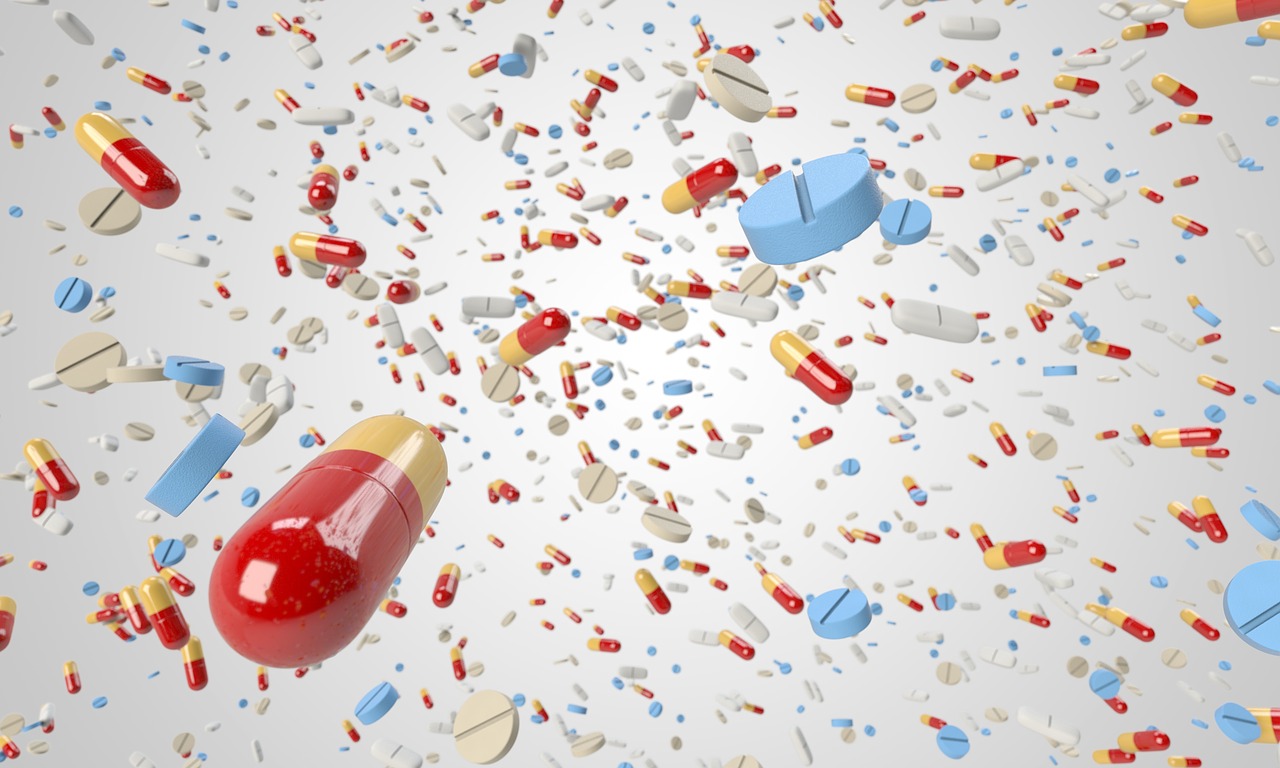 The discovery of antimicrobials is one of the most significant achievements of modern medicine and has substantially contributed to a reduction in the burden of common infectious diseases of humans and livestock globally.

The term “antibiotic growth promoter” is used to describe any medicine that destroys or inhibits bacteria and is administered at a low, sub-therapeutic dose. According to the National Office of Animal Health (NOAH, 2001), antibiotic growth promoters are used to “help growing animals, digest their food more efficiently, get maximum benefit from it and allow them to develop into strong and healthy individuals”. The use of antibiotics for growth promotion has arisen with the intensification of livestock farming. Infectious agents reduce the yield of farmed food animals and, to control these, the administration of sub-therapeutic antibiotics and antimicrobial agents has been shown to be effective. 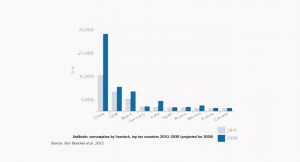 However, the widespread use of antimicrobials in human medicine and livestock farming has created selection pressure and fostered the emergence and spread of antimicrobial resistant pathogens worldwide. Resistant microbes and resistant genes can circulate between humans, animals, food, water and the environment. Since many antimicrobials commonly used in livestock are the same as or similar to antimicrobials used in human medicine, there is global concerns that drug-resistant organisms may pass from animals to humans and present a serious threat to public health. This phenomenon has already started occurring in our hospitals, where compromised patients and over-use of antibiotics create an optimal environment for promoting resistance in susceptible strains of bacteria. 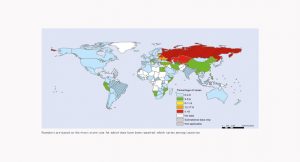 Ban on use of AGPs in livestock farming: Global Status

Antibioticgrowth promotion in animal production has been practiced for about 60 years in the United States and other countries. The United States Food and Drug Administration (FDA) approved the use of antimicrobials as feed additives without veterinary prescription in 1951 (Jones and Ricke, 2003). In the 1950s and 1960s, each European state approved the use of antimicrobials in animal feed in its own national regulations.

In Australia a range of growth promoters are employed. Pig farmers use arsenical compounds, flavophospholipol, the macrolides kitasamycin and tylosin, the quinoxaline olaquindox, and also virginiamycin, a streptogramin. Poultry producers use arsenical compounds, flavophospholipol, bacitracin and virginiamycin. Australian cattle farmers employ a range of ionophores, namely lasalocid, monensin, narasin and salinomycin. They also employ flavophospholipol and the macrolide oleandomycin. The glycopeptide avoparcin is still used in pig and poultry farming and in rearing cattle in Australia.

USA uses a wide range of antibiotics, including some considered to be “medically important”. Pigs are exposed to the greatest range of growth promoters. Though the figure is based on incomplete data, an estimated 80% of all antibiotics consumed in USA are used in food animals (U.S. FDA, 2010). In the USA, for example, pigs are exposed to B-lactam antibiotics, including penicillins, lincosamides and macrolides, including erythromycin and tetracyclines. All these groups have members that are used to treat infections in humans. Pigs in the USA are exposed to a range of other compounds intended for growth promotion. These include bacitracin, flavophospholipol, pleuromutilins, quinoxalines, virginiamycin and arsenical compounds. In the USA, compounds used as growth promoters for cattle include flavophospholipol and virginiamycin, both also used as growth promoters in poultry. Cattle are also exposed to ionophores such as monensin to promote growth. Poultry are given arsenical compounds.

The cattle industry in the USA is, perhaps, the most dependent on growth promoters as cattle have energy requirements that are high and that cannot be met easily without the use of growth promoters. High energy rations increase muscle growth and fat deposition in beef cattle, and help to improve milk productivity in dairy cattle. Unfortunately, the use of such rations is associated with side-effects, such as bloat and lactic acidosis, which can be debilitating or even fatal. These conditions are not a problem in Europe, where cattle diets contain more forage. To counteract this, monensin is used and, in addition to preventing the aforementioned conditions, it also significantly reduces ammonia and methane emissions (Mbanzamihigo et al., 1995). It does not belong to a class of medically important antibiotics and is not associated with any major resistance problems.

About 20 years ago, the use of feed antibiotics and some other antimicrobial compounds used as performance enhancers became the target of increasing public criticism and political controversy (particularly in the EU countries). Sweden was the first state to prohibit the use in feeding stuffs of antibiotic additives in 1986. Avoparcin was banned in Denmark in 1995 and Germany in 1996 arguing that this glycopeptide antibiotic produces resistance to glycopeptides used in human medicine (Castanon, 2007). These different national restrictions led to the EU Regulation No. 1831/2003 on additives for use in animal nutrition which stated that “antibiotics, other than coccidiostats and histomonostats, might be marketed and used as feed additives only until 31 December 2005; as from 1 January 2006, those substances shall be deleted from the Register” (European Union, 2003). In the United States, the use of AGPs was not banned, but the FDA recently issued voluntary guidelines for the industry to withdraw the use as growth promoters of medically important antibiotics (US Food and Drug Administration, 2013). In 2014, the Canadian government published a strategy mimicking the voluntary FDA approach on phasing out AGPs. Some OECD (Convention on the Organisation for Economic Co-operation and Development) countries have a ban on AGPs (Mexico, South Korea, New Zealand), while AGPs are authorized in other countries (for instance Japan). AGPs are not banned in most of the non-OECD countries which are major meat (poultry, pig and cattle) producers, such as China, Brazil, Russia Federation, Argentina, Indonesia, Philippines, and South Africa.

In India, it has been stated in a letter (No. 102-74/2014) dated 3rd June, 2014 issued by Department of Animal Husbandry, Dairying & Fishery, Ministry of Agriculture, that the State Governments and Union Territories are requested to advise the State Veterinarians, feed manufacturers and also the persons involved in treatment of animal for judicious use of antibiotics and hormones for the treatment of ailing food producing animals. An awareness program at the consumer and farmer level may also be arranged. At the same time use of antibiotics and hormones in animal feed should be stopped. But,theIndian meat and poultry farmers are continuing to use antibiotics even though authorities have officially urged to stop the practice.
In Nepal, it is not banned, neither Government has given any voluntary guidelines for the industry to withdraw the use of AGPs. In Bangladesh, though banned officially, indiscriminate use of AGPs continues.

Worried about Antibiotics in Your Food and Antibiotic-Resistant Bacteria?

It is of the utmost importance to preserve the efficacy of anti microbials for future use. Medically important antibiotics must be prohibited from use in a growth promotional role as a matter of immediacy.The use of antibiotics should principally be the last resort rather than a substitute for these methods. Antibiotics are not needed to promote growth, but they are essential to treat infectious disease and maintain animal health. In order to start a reformation of the Industry as a whole, it is essential that attitudes to the use of antibiotic growth promoters be changed. While the greatest threat to the continued use of antibiotics comes from human medicine, selection of resistance is a problem that affects everyone.

The use of antibiotics in feed for growth promotion has long been restricted in the EU, but there has been a lot of research activity looking at possible alternative compounds. There is a huge potential for feed additives such as organic acids, probiotics, prebiotics, essential oils and other natural growth promoters to improve performance in poultry and swine, without inducing any drug resistance and without posing any challenge to food safety.
There is currently no doubt that their efficacy is primarily based on antimicrobial effects and their ability to influence and partly modify the composition and overall concentration of intestinal microflora.Taking this into consideration, we can see how various new and some traditional feed additives claim to affect the composition or activity of intestinal microbiota.In recent years, some of those products have been described by the general term ‘eubiotics’, which is related to the Greek term ‘eubiosis’, referring to an optimal balance of microflora in the gastrointestinal tract.The main purpose of using such eubiotics is to maintain the intestinal eubiosis, which will result in an improved health status and performance in farm animals